Laser Doppler Velocimetry (LDV), also known as Laser Doppler Anemometry (LDA), is an optical technique used to measure the velocity of fluid flows. It was invented in the 1960’s, following the development of the first continuous He-Ne laser source at Bell Laboratories in 1962. It was first applied to water flows by Yeh and Cummins (1964) at the Columbia Radiation Laboratory, and later applied to gas flows by Foreman, George and Lewis (1965) at the research laboratories of Brown Engineering Company (later Teledyne Brown Engineering). 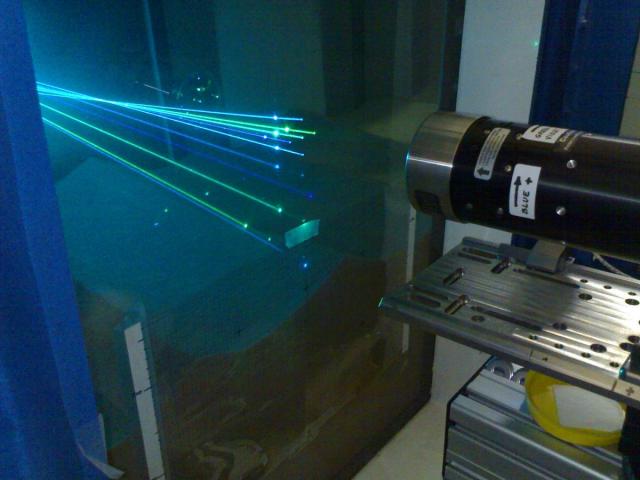 Its working principle is based on the Doppler effect of the scattered light coming from micron-size tracer particles moving with the fluid. Two light beams are needed for each velocity component to be measured. At the location where the beams cross (known as the measurement volume) they generate a fringe pattern from which “flashes” of light from the tracer particles are reflected and measured. The geometry of the fringes (Δs) is accurately known a priori based on the optical configuration of the system, and the intensity signal of the scattered light provides a measurement of time between fringes (Δt), from which the velocity can be computed: V = Δs / Δt.

Sketch of LDV measurement volume and signal generated by the tracer particles, from which velocity is computed.

The main advantage of optical measurement systems resides in the fact that measurements can be made from the outside of the flume, so the flow is not affected by the instrument, as opposed to other techniques. LDV systems perform measurements one point at a time, providing very high temporal resolution (up to 10,000+ Hertz) and very fine spatial resolution (in the order of 0.1 mm). These characteristics make LDV good for measurements very close to the boundaries and also for high turbulent flows. It is commonly found in the measurement of water and air flows, fuel injection and spray research and even in the biomedical field for blood flow.