As a renowned educator, researcher, and water resources engineer, Ven Te Chow’s accomplishments significantly influenced the understanding and importance of water resources throughout the entire world.

Chow was born in Hangchow, Checkiang, China on August 14, 1914. He received his B.S. in Civil Engineering with honors from National Chiao Tung University, China, in 1940, his M.S. Degree in Structural Engineering from Pennsylvania State University in 1948, and his Ph.D. in Civil Engineering (Hydraulics) from the University of Illinois at Urbana-Champaign (UIUC) in 1950. He joined the faculty of the Department of Civil Engineering at UIUC in 1951, advancing through the ranks to Professor of Hydraulic Engineering in 1958. In the intervening years, between these various degrees, he held a variety of technical positions in China and in the United States. As a professor he was immersed in research and instruction, and national and international professional assignments. 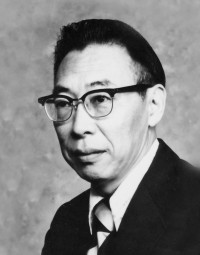 A summary of Ven Te Chow’s known activities and honors would fill more than three single-spaced pages; a few highlights follow. Ven was a founder and first president of the International Water Resources Association. He was also president of the American Geophysical Union?s Section on Hydrology, as well as fellow and founding member of the American Academy of Mechanics.

He received honorary doctorates from universities in India, Korea, France and Canada. The Louis Pasteur University in Strasbourg, France, awarded him an honorary doctorate, as well as the Louis Pasteur Medal (1976). He was elected to membership in the National Academy of Engineering (1973), a Fellow of the American Academy of Arts and Sciences, Academician of the Academia Sinica and of the China Academy, and on and on. Among his long list of awards was the Silver Jubilee Commemorative Medal of the International Commission on Irrigation and Drainage. Medals and awards galore came from such groups as UIUC, the American Society of Civil Engineering, the Western Electric Fund, Fulbright-Hays, and the National Science Foundation, to mention a few. The State of Texas named him an Honorary Citizen.

Chow was a consultant and lecturer to many governments, governmental agencies and private entities in such countries as Argentina, Austria, Brazil, Canada, the People’s Republic of China, Colombia, Costa Rica, the Dominican Republic, France, Ghana, Hungary, India, Israel, Japan, Korea, Mexico, the Netherlands, Peru, Puerto Rico, Turkey, the United Kingdom, Yugoslavia, and the United States. His professional contributions of major societal importance included USAID assistance to the Pan American Union, TVA, and the Texas Water Development Board. Chow was an adviser on water problems to the United Nations Secretariat, as well as an adviser to the U.S. State Department on foreign policy on water management in developing countries.

Chow was the author and editor-in-chief of two well-known books, long considered to be classics, namely Open-Channel Hydraulics (1959), and the Handbook of Applied Hydrology (1965). He was also the co-author of another popular textbook, Applied Hydrology, published after his death in 1988. He wrote his first book at the age of 27 on the Theory of Structures (in Chinese). He was the author or co-author of more than 218 other publications covering a wide range of subjects in hydrology and water resources. In addition he was editor of, and contributor to, a wide range of journals, such as Water Resources Research, the Academic Press Series Advances in Hydrosciences, Journal of Hydrology, the Elsevier’s series Developments in Water Science, McGraw-Hill’s Water Resources and Environmental Engineering. He was Editor-in-Chief of Water International until very shortly before his death.

Chow was an admired and highly respected colleague at UIUC, revered by his legion of students both here at the university and worldwide. He often was described as a giant in his field, as both a developer and a disseminator of knowledge. It is fair to describe Chow as a worldwide educator and public servant in hydrology and water resources, a stature rarely achieved. He was a true ambassador and leader for the then-emerging field of Hydrologic Science. He organized the first U.S. Meeting of Hydrology Professors at UIUC in 1969.

Ven Te Chow died on July 30, 1981, in Champaign, Ill. He and his wife Lora had two children, Margot and Marana.