As part of river restoration, the geomorphological, ecological, and engineering aspects must be considered. The river restoration facilitates the river or stream ecosystem to stabilize at a faster rate than through its natural physical and biological processes of habitat development and colonization. Geomorphological sequences ubiquitously found in natural rivers called pools and riffles had been modeled in an experimental flume for different possible scenarios. In order to analyze the impact of such structures a rough flat bed condition, a centered pool-riffle, and an alternate pool-riffle had been tested for two different flows. In addition, the flat bed condition and the alternate pool-riffle sequence are also being analyzed under the presence of vegetation. A vegetation pattern had been established in what is called the damp or seasonally flooded zone. Aquarium plastic plants where placed in the model simulating the canopy in the damp zone. Below this zone most grasses cannot grow, since they cannot tolerate lengthy periods of submergence. This problem can be seen in the real world from two different perspectives: one is when the vegetation is placed on purpose, and the other when unexpected vegetation grows in the zone.

For the non-vegetated scenarios specific patterns of convergence and divergence, secondary circulation, and turbulent anisotropy as the flow progresses along the pool-riffle structure were observed. These results demonstrate that the flow is extremely three dimensional, being more evident the influence of the presence of the structures for the low flow condition. Implications for sediment transport, bed and bank morphology and aquatic habitat were analyzed. For the vegetated cases these results will be used for comparison purposes in the analysis.

Bottom shear stress distribution through the bed in the different cases, Reynold stress distribution and , secondary currents, velocity profiles inside and outside the vegetated zones, the Manning’s n, and water depth, are being computed and analyzed in these completely three dimensional features. One of the main reasons of using different scenarios is to make comparisons to observe if the presence of a vegetated pattern would induce a re- meandering process in a straight channel, and the implications of it presence from the ecological, geomorphological, and engineering point of view. 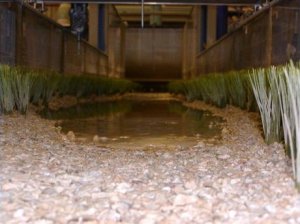 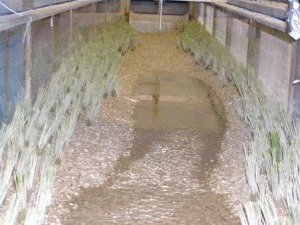 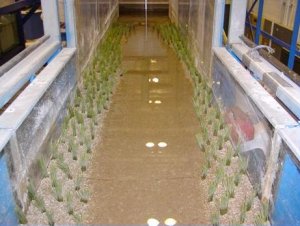 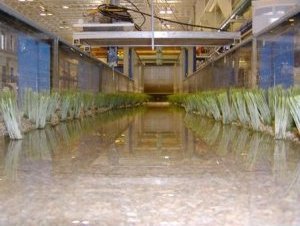