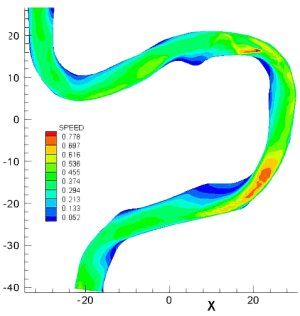 The objective of this research is to incorporate sediment transport modeling to the former hydrodynamic model called STREMR (Bernard, 1993). STREMR generates discrete solutions of the incompressible Navier-Stokes equations for depth-averaged two-dimensional flow. STREMR includes a three-dimensional (3-D) secondary flow correction to account for the interaction between lateral curvature and vertical nonuniformity. This interaction essentially causes high velocities to migrate to the outside of a curve. STREMR uses a second-order model (k-e) for modeling the turbulence.

The Lab has added a sediment transport model to STREMR. The new version is called STREMR HySeD. The sediment transport model incorporates both suspended and bed-load transport. Ten sets of size classes can be treated as suspended transport. For now just one bed-load transport class has been considered. Different formulae for computing entrainment and bed-load have been implemented in the model. STREMR HySeD incorporates interfaces developed in Visual C++ and some features for pre- and post- processing have been added to maximize the analysis of the results.

STREMR HySeD has been tested in a number of situations, including the SEPA (Sidestream Elevated Pool Aeration) station 3, operated by Metropolitan Water Reclamation District of Greater Chicago.

Download an animation of the progression of sediment in the model [AVI, 240K] 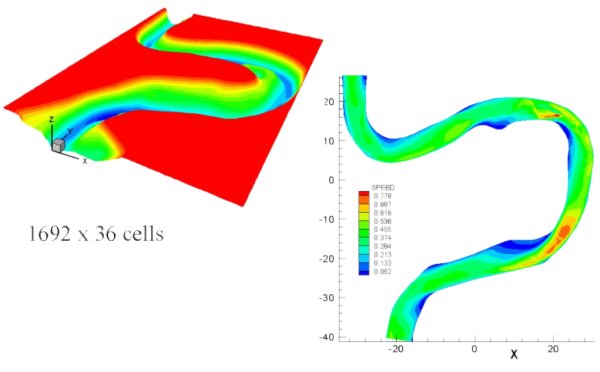 Sediment transport, no entrainment only deposition

Sediment transport, with entrainment and deposition